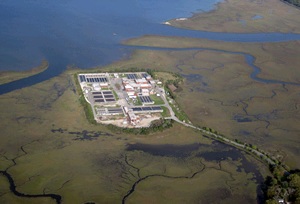 Wastewater treatment protects the environment and public health. Wastewater contains pollutants and microorganisms that are harmful to humans and wildlife.

Primary treatment involves physically removing debris and large particles from the wastewater to prepare it for the biological treatment process that occurs later.

Upon arrival at the plant, wastewater enters one of two pumping stations. Sewage from West Ashley enters a large caisson, where powerful pumps convey it into stilling basins. Mechanical augers grind up large debris, everything from candy wrappers to rope, and filter it out for disposal.

Next, wastewater enters grit removal tanks, where heavy inorganic material such as sand, gravel, seeds, and coffee grounds settle to the bottom by gravity. The wastewater then flows into the primary settling basins, where smaller particles settle out, and mechanical devices skim off oil and solids that float to the top.

Once solids and large particles are removed, the wastewater flows into large aeration basins, where air is injected to aid the growth of microorganisms that naturally live in wastewater. Diffused air enters these 30-foot-deep tanks from the bottom, creating bubbles that make the water appear as if it is boiling.

The microorganisms, called “activated sludge,” clean the wastewater by digesting organic materials and other contaminants. Wastewater remains in the aeration basins for about three hours to allow time for the microorganisms to grow and consume the bacteria.

Next, the wastewater enters basins called secondary clarifiers, where the activated sludge settles out of the water; some of it is reused in the treatment process and the rest is collected, thickened, and de-watered using rotary presses that squeeze out the excess water. The resulting sludge is transported to a landfill.

The nearly clean water now flows into final settling tanks where any remaining particles are settled out. Finally, sodium hypochlorite is added to the water to kill the remaining bacteria. The resulting effluent is then released into the Ashley River; it is cleaner than the river water and is not harmful to the harbor ecosystem.